Before she was Harriet : the story of Harriet Tubman 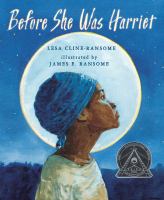