I am a unicorn! 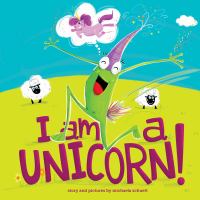 Book
While Frog is convinced he's a unicorn with his clip-on tail, party hat horn, and ability to fly on swings, Goat is determined to show Frog that he's not, but Goat is about to learn that when someone truly believes, sometimes magic happens.