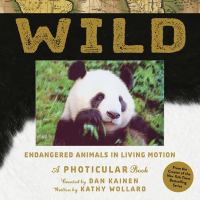 Book
"You can't believe your eyes. But you can believe the numbers. The Photicular series, with four books published in the last five years, now has 2 million copies in print--and with every new title published the backlist rises to the occasion. After last year's success with Jungle (over 215,000 copies in print in just a few months), here comes Wild -- the book, and the idea, for which the series could have been invented. Wild captures eight endangered animals in living motion. From the cover panda shown lazily munching on leaves, to an albatross swooping its magnificent wings, to a bumblebee taking a sip of water, Wild throws a spotlight on the mammals, birds, and insects that are threatened with extinction. We see gorillas at play, a rhinoceros and its baby trotting across the savanna, a pangolin skittering along the landscape. There's a romantic big cat--an Amur leopard--and the personable elephant bathing in a river. An opening essay explores the environmental and economic threats to animal populations and how conservationists are working to slow--and, when they can, reverse--the damage. Profiles of each animal accompany the images, which are warm, accessible, and friendly. The story is urgent. Together, it's a compelling book about what's at stake now, and in our future"--