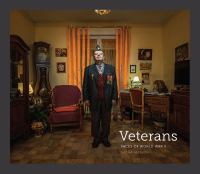 "Since 2010, Ukrainian-born photographer Sasha Maslov has traveled to more than twenty countries, interviewing participants in World War II and taking richly detailed photographs of them in their homes. Soldiers, support staff, and resistance members candidly discuss wartime experiences and their lifelong effects. We meet Ichiro Sudai, who trained to be a kamikazi; Urszula Hoffmann, who taught young children as a member of the Polish resistance; Roscoe Brown, a commander in the Tuskegee Airmen, the first African American military aviators; Charin Singh, a farmer from Delhi who spent seven years as a Japanese prisoner of war, returning home only in 1949; and Uli John, who lost an arm while serving in the German Army and ultimately befriended former enemy soldiers as part of a network of veterans--"people who fought in the war and know what war really means." Veterans is a record of a cataclysmic time in world history and a tribute to the members of an indomitable generation; it is also a meditation on memory, human struggle, and the passage of time. Its portraits are indelible."--Provided by publisher.