Garth Brooks, the anthology. Part one, The first five years 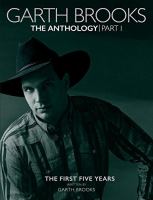 Book
Part 1: The First Five Years, looks at Brooks' meteoric rise to superstardom from 1989-1993 in his own words, as he tells the stories behind creating, recording and promoting his first five albums for Capitol Nashville. His memories are supplemented by others who were there, including the songwriters, musicians, and Brooks' longtime manager, Bob Doyle. The book also includes more than 150 never-before-seen photos, tracking sheets, session charts, and even Brooks' job application for Cowtown Boots, the shoe store where he worked in Nashville while he was a struggling artist. Also included are 5 CDs of outtakes, first takes, demos and masters. Of the 52 songs included on the CDs, 19 are new, unreleased or demo versions