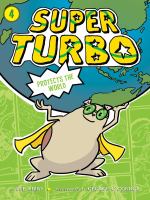 When evil Whiskerface sees the perfect chance to test his plan to take over the world, it's up to the super pets to stop him in this fourth Super Turbo book.