Composting for a new generation : latest techniques for the bin and beyond 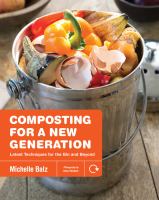 Book
Composting is no long only in the realm of environmentalists! It's not just about reducing food waste; most composters get their hands dirty because of the benefits it brings to the soil in their garden. All the extra nutrients makes for well-fed gardens with plenty of nutrients and rich moisture. Composting has been under the radar screen until now, and seen as a boutique, West Coast thing, says Jared Blumenfeld, who oversees California as well as two other Western states and the Pacific for the Environmental Protection Agency. But now everyone from Massachusetts to Minnesota has programs starting up, and pretty soon there will be a critical mass. Composting for a New Generation includes tried-and-true composting methods and new, innovative techniques. You'll learn the science of composting, traditional bin composting (including how-to sections on building your own bin), vermicomposting (with worms), composting with nature, keyhole gardens, organic composting, and using your finished compost. Composting for a New Generation is the most complete book to date for your organic soil needs.