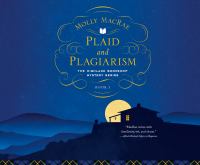 Janet Marsh's move into her house has been delayed due to vandalism. Then, when the women go to look for clues that might tell them to who is guilty, they find a corpse (murder!) in Janet's garden shed. Constable Hobbs answers their emergency call. He's calm and quietly pleased, as he's never had a murder case. Then the contents of a dozen or so garbage bags are discovered behind the bookshop. The letters inside are nasty. The more the women find out about Una, the more people they discover who detested her and aren't sad she's gone. If Janet and her bookshop crew are reading the clues right, they're about to expose the most sensational story the town of Inversgail has ever heard.