It occurs to me that I am America : new stories and art 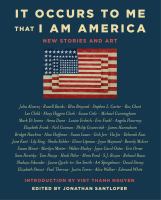