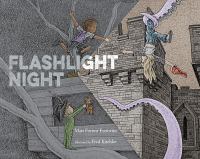 "Flashlight Night is an ode to the power of imagination and the wonder of books. Three children use a flashlight to light a path around their backyard at night; in the flashlight's beam another world looms. Our heroes encounter spooky woods, a fearsome tiger, a time-forgotten tomb, an Egyptian god, a sword-fighting pirate, and a giant squid. With ingenuity, they vanquish all, then return to their tree house--braver, closer, and wiser than before--to read the books that inspired their adventure."--provided by publisher.