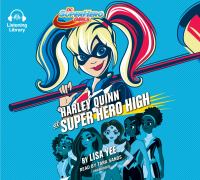 Harley Quinn loves fighting crime with her classmates like Wonder Woman, Batgirl, and Supergirl, but she always does it her with own madcap style--and a big mallet! It's no surprise that Harley can't resist getting involved with an upcoming inter-school battle of the bands and a fantastic cosmic carnival that appears only once a year--and this year, it's coming to Earth! But as things get stranger, Harley knows how to get to the bottom of a mystery--and deliver a great punch line while doing it!