Between the lines : how Ernie Barnes went from the football field to the art gallery 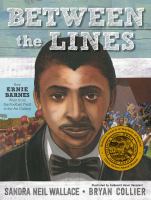 Discover the true story of NFL star Ernie Barnes a boy who followed his dreams and became one of the most influential artists of his generation with this beautifully illustrated nonfiction picture book.