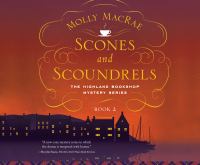 Inversgail, on the west coast of the Scottish Highlands, welcomes home native daughter and best-selling environmental writer Daphne Wood. Known as the icon of ecology, Daphne will spend three months as the author in residence for the Inversgail schools. Janet Marsh and her business partners at Yon Bonnie Books are looking forward to hosting a gala book signing for her. Daphne, who hasn't set foot in Scotland in thirty years, is--eccentric. She lives in the Canadian wilderness, in a cabin she built herself, with only her dog for a companion, and her people skills have developed a few rough-hewn edges. She and the dog (which she insists on bringing with her) cause problems for the school, the library, and the bookshop even before they get to Inversgail. Then, on the misty night they arrive, a young man--an American who'd spent a night in the B & B above Yon Bonnie Books--is found dead outside a pub. Daphne did her Inversgail homework and knows that Janet and her partners solved a previous murder. She tries to persuade them to join her in uncovering the killer and the truth. To prove she's capable, she starts poking and prying. But investigating crimes can be murder, and Daphne ends up dead, poisoned by scones from the tearoom at Yon Bonnie Books. Now, to save the reputation of their business--not to mention the reputation of their scones--Janet and her partners must solve both murders. And Daphne's dog might be able to help them, if only they can get it to stop howling--