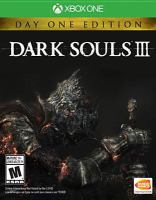 Xbox One, Day one edition.

As fires fade and the world falls into ruin, journey into a universe filled with more colossal enemies and environments. Delve into a world of epic atmosphere and darkness through the series hallmark rewarding gameplay and immersive graphics. Now only embers remain...