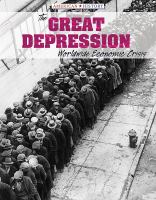 Book
The Great Depression was a difficult time in American history, and it eventually became an economic crisis that affected the entire world. Readers uncover important facts and enlightening details about the Great Depression, including what caused it, how average Americans dealt with financial hardships during this time, and what programs were created to get Americans back to work.