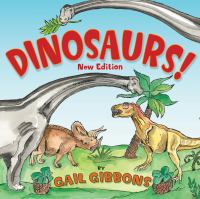 Step back in time...to the Age of the Dinosaurs! Dinosaurs ruled Earth for milions of years. Some were small and could run very, very fast. Others were big and covered with spikes and plates for protection. Some were huge and terrified other dinosaurs with their long, sharp teeth. In this newly revised edition, Dinosaurs! reflects further paleontological discoveries made since its publication in 2008, while still offering young dino-enthusiasts a timeless and accessible look at these magnificent creatures.