Into the black nowhere : an Unsub novel 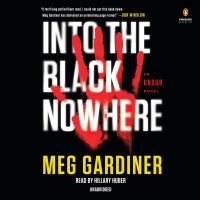 A riveting psychological thriller inspired by the infamous, real-life serial killer Ted Bundy, in which an FBI criminal profiler faces off against a twisted and charismatic UNSUB. When five Texas women disappear without trace, each on Saturday nights, the local authorities call in the FBI Behavioral Analysis Unit. The newest member of this elite group of criminal profilers, Caitlin Hendrix, is all too familiar with hunting society's most depraved and twisted criminals. She suspects that the women were taken by a highly confident killer who convinces victims to lower their guard so he can gain power over them. But there's no evidence that any of the victims is dead-until a dog drags home a bloody strip of fabric torn from a white baby doll nightgown. Caitlin and the team find the victim's body deep in the woods, laid out in a white nightie, which she was dressed in after death. Then they find a second victim, also dressed in a white nightgown. Her body is surrounded by Polaroid photos, stuck in the ground like headstones. Each one pictures a woman-some alive and terrified, some dead. A devastating serial killer is at work, and Hendrix will stop at nothing to catch him before his victims pay the ultimate price.