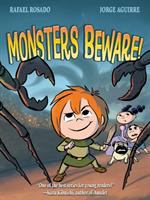 Claudette, Marie, and Gaston are no strangers to the struggle against evil. But even as seasoned fighters, nothing could prepare them for the danger their town will face as the host of the Warrior Games. As their town's representatives, they will not only need to win the games, but they must also stop the scheming Sea Queen's plans of resurrecting the wizard Grombach and conquer the world.
"Claudette is back AGAIN, and she's ready to kick major monster butt! She's fought giants, clobbered dragons, and now Claudette faces her biggest challenge yet... herself! Well, that and a gang of vile monsters. It all begins when Claudette's town hosts the annual Warrior Games. After some sneaky maneuvering, Claudette manages to gets herself, Marie, and Gaston chosen as her town's representatives. But none of Claudette's past battles has prepared her for this. And to make matters worse, they must stop the vicious Sea Queen and her evil children from using the Warrior Games to free the dark Wizard Grombach and conquer the world! In Monsters Beware!, the third and final book of the Claudette graphic novel series, Claudette is put the ultimate test. With her honor on the line will she learn that there's more to a fight than just winning?" --