How to spot a sasquatch 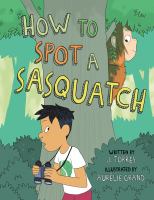 On a camping trip with the Junior Rangers, Jay feels like the odd one out. He's determined to get a photo of Bigfoot--but none of his friends believe Bigfoot exists. But if there's no such thing as Bigfoot, why is there a giant footprint? And who is stealing all the snacks? Meanwhile, Sass the Sasquatch and her curious forest friends are playing practical jokes on the campers. On the last day of camp, disaster strikes when Jay falls into a rushing river. Sass comes out of the woodwork--despite her parents' warnings to stay away from humans!--just in time to save his life. Soon after, Jay and Sass become fast friends, proving that nothing is impossible when it comes to friendship.