In the enemy's house : the secret saga of the FBI agent and the code breaker who caught the Russian spies 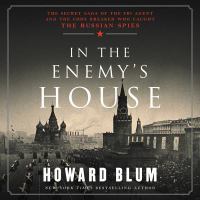 Illuminates the lives of little-known individuals who played a significant role in America's history as he chronicles the true story of a critical, recently declassified counterintelligence mission and two remarkable agents whose story has been called "the greatest secret of the Cold War.