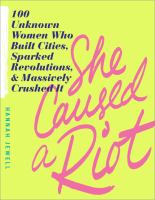 Book
When you hear about a woman who was 100% pure and good, you're probably missing the best chapters in her life's story. Maybe she slept around. Maybe she stole. Maybe she crashed planes. Maybe she got shot, or maybe she shot a bad guy (who probably had it coming.) Maybe she caused a scandal. Maybe she caused a riot... From badass writer Hannah Jewell, She Caused a Riot is an empowering, no-holds-barred look into the epic adventures and dangerous exploits of 100 inspiring women who were too brave, too brilliant, too unconventional, too political, too poor, not ladylike enough and not white enough to be recognized by their shitty contemporaries. From 3rd-century Syrian queen Zenobia to 20th-century Nigerian women's rights activist Funmilayo Ransome-Kuti, these are women who gave absolutely zero f**ks, and will inspire a courageous new movement of women to do the same.