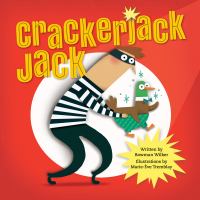 Book
"This is a story about a wisecracker, firecracker, knucklecracking crook named Jack. Jack devises a ploy to rob a bank, with a duck as his unlikely accomplice. This villainous duo bumbles their way through a robbery, in which Jack ends up knocked unconscious, arrested for the crime, and thrown in jail. Meanwhile, the duck makes off like a bandit, escaping with all the dough to live a life of luxury in the tropics. Rhyming text, onomatopoeia, and an energetic beat paired with comical illustrations make this a fast-paced read that guarantees laughs."--