Curiosity : the story of a Mars rover 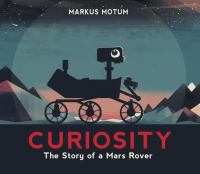 Maybe you remember when a little robotic spacecraft landed on a far-off planet. On August 6, 2012, the rover Curiosity touched down on the rocky surface of Mars and now she's ready to guide you through her journey firsthand. From idea to creation and beyond, this fact-filled, stylish book introduces readers to Curiosity and her mission: to discover more about the red planet and search for evidence of life. How did Curiosity get her name? What tools does she use to carry out her tasks? In her own voice, the popular NASA rover tells how and why she traveled more than 350,000,000 miles to explore a planet no human has ever visited . . . and what she's been doing there. In his debut picture book, Markus Motum brings Curiosity's story to life in vivid color: the deep blues of space set off the warm, rusted hues of Mars's dusty red surface, marking this lovable rover and her mission as something special - truly a world apart.