Snowboy and the last tree standing 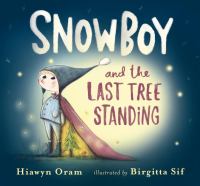 Greedy Greenbackboy's got an idea for a game. He wants Snowboy to help him cut down all the trees in the forest and catch all the fish in the deep and ever-moving ocean. But Snowboy recognizes the importance of life in the natural world around him and, in this evocatively told tale, has to trust his instinct to protect, rather than destroy...Publisher website.