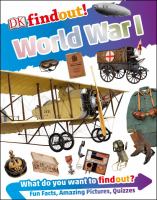 Commemorating the 100th anniversary of the end of WWI, discusses the build-up to the war, along with battles, history, technology, and more. Fun facts, amazing pictures, quizzes.