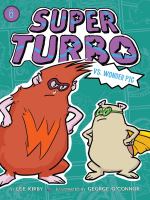 "When Wonder Pig starts to act strange, Super Turbo gets suspicious. Is it possible that the superhero guinea pig is actually working undercover for the evil rat Whiskerface?"--