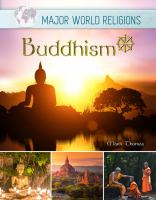 Book
Today, Buddhism is the world's fourth-largest religion, with over 576 million followers worldwide. Buddhists follow traditions and spiritual beliefs that were taught by Guatama Buddha, a revered wise man. Guatama Buddha lived in the eastern part of the Indian subcontinent more than 2,400 years ago. Although born into a royal family, he became concerned with the problem of suffering in the world and spent years studying a variety of religions and philosophies. Eventually, he was "enlightened," and spent the rest of his life teaching people the path to true happiness. Buddhism soon spread throughout Asia, and today most Buddhists live in countries like China, Thailand, Japan, and Burma. This book describes the origins and history of Buddhism, and sheds light on some of this religion's most important beliefs, practices, and rituals.