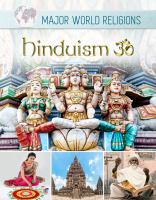 Book
Hinduism is one of the world's oldest religions. It originated in the beliefs and practices of various civilizations and cultures that lived in the Indus River Valley more than 3,000 years ago. Hinduism is also one of the world's most complex and diverse religions, and its followers, known as Hindus, have a great variety of core beliefs and revere millions of different deities. Today, around 1 billion people follow Hinduism, making it the world's third-largest religion. Most Hindus live in India and Nepal. This book examines the origins and history of Hinduism, and explores its sacred texts--the Vedas, Upanishads, and other writings that include stories, hymns, poems, and rituals on which Hindus base their beliefs. The book also explores how beliefs differ among Hindu sects, and how the faith is practiced today.