Hermes : tales of the trickster 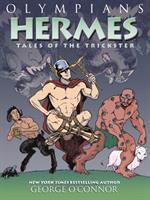 Retells in graphic novel format the stories from Greek mythology featuring Hermes.
"Born in a cave to a self-banished mother, clever, mischievous, unrelenting Hermes is a handful from his first day in the world. From infancy, when he bewitches fifty cows and bends them to his will to play a joke on his older half-brother Apollo, to his adolescence and adulthood when he becomes father to the equally mischievous Pan, Hermes's story is wildly entertaining as he brings a little bit of chaos to everything he touches."--page 4 of cover.