Crash : the Great Depression and the fall and rise of America 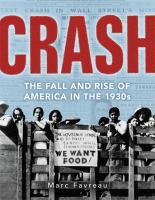 "Marc Favreau documents the Great Depression--a time when Americans from all walks of life fell victim to poverty, insecurity, and fear--and tells the incredible story of how they survived and, ultimately, thrived. This is the story of the Great Depression in the United States, from the sweeping consequences of the market collapse to the more personal stories of individuals and communities caught up in the aftermath. Packed with photographs, primary source documents, and firsthand accounts, Crash shines a spotlight on pivotal moments and figures across ethnic, gender, racial, social, and geographic divides, reflecting many different experiences of one of the most turbulent periods in American history. Discover what life was like for historical figures and everyday Americans as the country went from the highs of the roaring 20s to the lows of the Great Depression and back to booming in the 1940s"--
"The Great Depression in the United States had wide-ranging effects on people of all walks of life"--