How sweet the sound : the story of Amazing grace 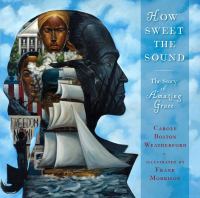 Book
"One stormy night at sea, a wayward man named John Newton feared for his life. In his darkest hour he fell to his knees and prayed—and somehow the battered ship survived the storm. Grateful, he changed his ways and became a minister, yet he still owned a slave ship. But in time, empathy touched his heart. A changed man, he used his powerful words to help end slavery in England. Those words became the hymn 'Amazing Grace.'"--page 2 of cover.