What was a cliché before it became one? 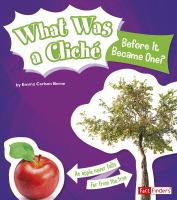 Book
"Anchors aweigh! Let's call a spade a spade. Last one out is a rotten egg! We've all heard cliché's before -lots and lots of times. That's the thing. We've heard them so often they've become meaningless. Learn what a cliché was before it became one, and practice weeding cliches out of your writing in favor of more precise language. Examples of cliché-ridden and cliché-free language abound in this title, along with fun exercises to help strengthen your poetry and prose"--Back cover.