Indianapolis : the true story of the worst sea disaster in U.S. naval history and the fifty-year fight to exonerate an innocent man 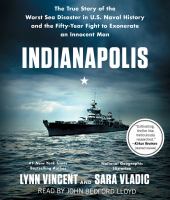 "Based on years of original research and new reporting, two acclaimed authors deliver the riveting and emotionally wrenching full story of the worst sea disaster in United States naval history: the sinking of the USS Indianapolis during World War II--and the fifty-year fight to exonerate the captain after a wrongful court martial."--Provided by publisher.