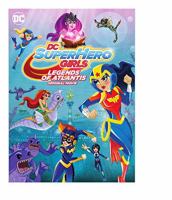 DVD
Dive deep into adventure in this all-new underwater epic. Sisters of the sea, Siren and Mera catch the students of Super Hero High off guard in a surprise attack to steal a very powerful relic, the Book of Legends. With the book in her possession and harnessing more power than ever, Siren aims to raise an army from the dephths of the ocean's trenches. It's up to Wonder Woman, Batgirl, and Supergirl to help Aquaman in defending Atlantis and stop the sinister Siren.