The bookshop of yesterdays 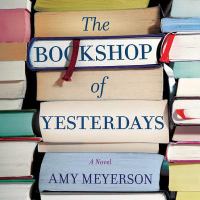 Miranda Brooks grew up in the stacks of her eccentric Uncle Billy's bookstore, solving the peculiar scavenger hunts he would create just for her. But on her twelfth birthday, Billy disappears from Miranda's life, until sixteen years later, when she receives the unexpected news that Billy has died and left her Prospero Books. Miranda returns to the store, where she finds clues that Billy has hidden for her. Miranda becomes determined to solve Billy's final scavenger hunt.