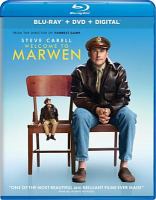 Blu-ray
Scheduled release date: April 9, 2019.
When a devastating attack leaves Mark Hogancamp shattered and without his memory, no one expected recovery. But by putting together pieces from his old and new life, Mark meticulously creates a wondrous fantasy world, where he draws strength to triumph in the real one. His astonishing art installation becomes a testament to the powerful women who support him on his journey.