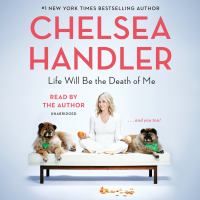 In a haze of vape smoke on a rare windy night in L.A. in the fall of 2016, Chelsea Handler daydreams about what life will be like with a woman in the White House. And then Donald Trump happens. In a torpor of despair, she decides that she's had enough of the privileged bubble she's lived in, a bubble within a bubble and that it's time to make some changes, both in her personal life and in the world at large. At home, she embarks on a year of self-sufficiency, learning how to work the remote, how to pick up dog shit, where to find the toaster. She meets her match in an earnest, brainy psychiatrist and enters into therapy, prepared to do the heavy lifting required to look within and make sense of a childhood marked by love and loss and to figure out why people are afraid of her. She becomes politically active, finding her voice as an advocate for change, having difficult conversations, and energizing her base.