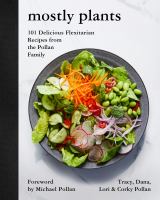 Book
“Eat food, not too much, mostly plants.” With these seven words, Michael Pollan—brother of Lori, Dana, and Tracy Pollan, and son of Corky—started a national conversation about how to eat for optimal health. A decade later, the value of a plant-based diet is widely accepted––and yet for many people, easier said than done. So what does choosing “mostly plants” look like in real life? In families where not everyone is on the same vegetarian page the word “mostly” is key. The point isn’t necessarily to give up meat entirely but to build a diet that shifts the ratio of animal to plants to create delicious––and nutritious––meals sure to appeal to everyone.