Moonshot : the flight of Apollo 11 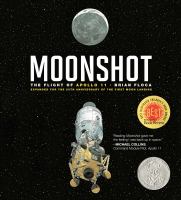 Expanded for the 50th anniversary of the the first moon landing.

Provides an up-close look at the historic mission to the moon that took place fifty years ago.