Sadie and the silver shoes 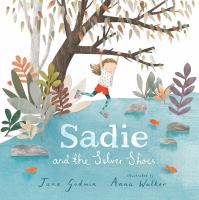 "With three older brothers to pass along hand-me-downs, Sadie doesn't have much say in choosing her clothes. Her outfits always look interesting, though (even if some kids at school might not think so). But Sadie is allowed to pick her shoes, so one day she buys the most beautiful shoes ever -- shoes that sparkle in the sun, shoes she wears everywhere. That is, until Sadie and her brothers hop down a creek on an adventure, and one shoe falls off and is swept away. Whatever will Sadie do with one silver shoe?"--publishers website.