Go for the moon : a rocket, a boy, and the first moon landing 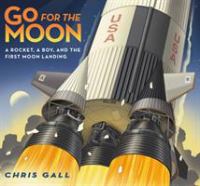 Released in conjunction with the 50th anniversary of the moon landing, this nonfiction picture book offers a step-by-step explanation of how the Apollo 11 spacecraft worked, as told by a young enthusiast. Includes glossary.