The unofficial ultimate Harry Potter spellbook : a complete guide to every spell in the wizarding world. 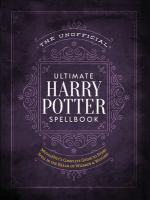 Book
The Unofficial Ultimate Harry Potter Spellbook is a beautiful, elegantly designed reference that details all of the known spells cast in the Harry Potter films, books, video games, and card games, as well as official Harry Potter spinoffs, such as Fantastic Beasts and Where to Find Them. Each spell is given its own entry including spell name, pronunciation details, a description of the spell effect, spell casting methods, wand movements, hand movements and vocalizations, plus primary sources in which the spell was used. Readers will also find trivia related to each spell, such as who it was used against, what the outcome was, or what a spell's unusual history might be. There are more than 200 spells in all, plus suggestions for strategic spell use and methods for creating original spells.
Place Hold
Add to Basket Remove from Basket
Print / Email
► Additional Details
► Reviews, Series, Suggested Reads, Summaries & More
► Shelf Browser
► MARC Record