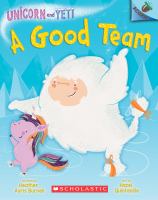 New friends Unicorn and Yeti are having a little trouble finding something they are both good at. Yeti is good at kicking a ball, Unicorn is not, Unicorn is fast, Yeti is not--so they finally try ice skating, which neither of them has ever done, because they have a chance to be equally good (or bad) at it.