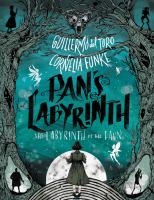 Set in post-civil war Spain, a young girl flees the home of her cruel step-father into an underground fantasy world where she encounters a strange creature and a terrifying battle between good and evil.