The art and making of The Lion King 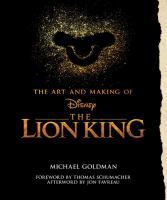 Book
"Stunning concept art, powerful behind-the-scenes photography, and fascinating interviews with the cast and crew pack The Art and Making of The Lion King, offering an inside perspective on how director Jon Favreau and his talented team used the most advanced virtual cinematography and computer graphics techniques to craft a film of both legend and hyperrealism. The story of The Lion King has entered the pantheon of cultural mythology, as has its iconic music. In revisiting this tale, the filmmaking team set off for an adventure of a lifetime: an expedition across the southern portion of Kenya in Africa. These seasoned filmmakers gathered reference photographs, scans, and other materials to apply to the digital moviemaking process and in turn were immersed in the nuances of the real environment. Once back at the studio, they utilized common filmmaking tools with state-of-the-art virtual reality (VR) technology and new, ultrafast rendering technologies to create a "virtual production," a concept they pushed further than it had ever been before. The Art and Making of The Lion King documents this captivating journey and closes the circle with a discussion on a modern-day conservation program called the Lion Recovery Fund (LRF)."--Amazon.com.