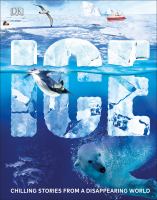 Describes how plants, animals, and humans survive in the Arctic regions, including facts on prehistoric life, sea ice, and the growing threat to the biome due to climate change.