Talking to strangers : what we should know about the people we don't know 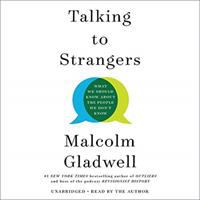 A new classically Gladwellian intellectual adventure. With a challenging and controversial excursion through history, psychology, and scandals taken straight from the news. Gladwell revisits the deceptions of Bernie Madoff, the trial of Amanda Knox, the suicide of Sylvia Plath, the Jerry Sandusky pedophilia scandal at Penn State University, and the death of Sandra Bland.