Just ask! : be different be brave, be you 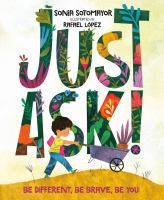 Book
Sonia and her friends plant a garden, and each one contributes in his or her own special way, in a book that celebrates the many differences among humans.