Play hungry : the making of a baseball player 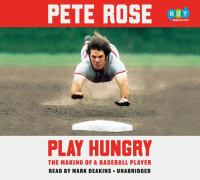 "Pete Rose was a legend on the field. As baseball's Hit King, he shattered records that were thought to be unbreakable. And during the 1970s, he was the leader of the Big Red Machine, the Cincinnati Reds team that dominated the game. But he's also the greatest player who may never enter the Hall of Fame because of his lifetime ban from the sport. Perhaps no other ballplayer's story is so representative of the triumphs and tragedies of our national pastime. In Play hungry, Rose tells us the story of how, through hard work and sheer will, he became one of the unlikeliest stars of the game. Guided by the dad he idolized, a local sports hero, Pete learned to play hard and always focus on winning. But even with his dad's guidance, Pete was cut from his team as a teenager--he wasn't a natural. Rose was determined, though, and never would be satisfied with anything less than success. His relentless hustle and headfirst style would help him overcome his limitations, leading him to one of the most exciting and brash careers in the history of the sport."--