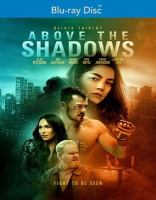 Blu-ray
Following the events of tragic loss, 'Above the Shadows' recounts the events of Holly's life as she becomes so consumed with grief that she literally becomes invisible to the rest of the world. Only shown love and attention from her mother, Victoria, as a middle child, all is changed when Victoria is suddenly struck with a terminal illness resulting in her death. Alone and frustrated, Holly disappears from the physical plain of the world, until she encounters wayward MMA fighter, Shayne, the only one that can see her. Renewed with hope for one another, Shayne and Holly work together to overcome their deep emotional trauma and restore Holly back to the physical plain of existence.